Abstract: The effect of Yb3+ co-doping on relaxation dynamics of excited states of Er3+ ion in oxyfluoro tellurite (TZYN) glasses was demonstrated employing excitation and luminescence spectroscopy. The up-conversion luminescence spectra were studied as a function of temperature in the 298–633 K range, and fluorescence intensity ratio (FIR) for green bands due to the 2H11/2 → 4I15/2 and 4S3/2 → 4I15/2 transitions of Er3+ ion against temperature was determined. The temperature sensing performance of TZYN:Er3+/Yb3+ glasses was studied using the FIR technique up to 633 K. The maximum absolute (Sa) and relative (Sr) sensitivity of 0.00246 K−1 at 413 K and 0.72% K−1 at 323 K, respectively, were determined for TZYN:0.5Er3+ /1.0 Yb3+ glass

Abstract: The surface crystallization of non-ferroelectric, polar crystals from a glass often leads to piezoelectric surface layers. The surface layer not only shows a crystallographic orientation preference (texture) but also prefers one polarity during crystal growth. This cannot be explained by the common periodic bond chain theory or Bravais–Friedel–Donnay–Harker law. For the most frequently studied polar crystals in glass-ceramics, fresnoites of the general composition (Ba/Sr)2Ti(Si/Ge)2O7 or lithium disilicate (Li2Si2O7), the dipoles are, respectively, aligned antiparallel or parallel to the dominant growth direction after crystallization. Hence, the polarity of the crystals cannot be the decisive factor for texture development. Taking the structure of the respective unit cells into account shows that these crystals grow with the corners of coordination polyhedra oriented toward the bulk. This is in agreement with the coordination polyhedra rule, according to which crystal growth along the direction of polyhedral corners should be preferred while the edges show the second-highest growth rate. Furthermore, the planes parallel to the face of the coordination polyhedron undergo the slowest growth.

Abstract: This work is aimed at the development and investigation of the oxidation behavior of ferritic stainless-steel grade AISI 441 and polymer-derived ceramic (PDC) protective coatings. Double-layer coatings of a PDC bond coat below a PDC top coat with glass and ceramic passive fillers’ oxidative resistance were studied at temperatures up to 1000 °C in a flow-through atmosphere of synthetic air and in air saturated with water vapor. Investigation of the oxide products formed at the surface of the samples in synthetic air and water vapor atmospheres, at different temperatures (900, 950, 1000 °C) and exposure times (24, 96 h) was carried out on both uncoated steel and steel coated with selected coatings by scanning electron microscopy (SEM) and X-Ray diffraction (XRD). The Fe, Cr2O3, TiO2, and spinel (Mn,Cr)3O4 phases were identified by XRD on oxidized steel substrates in both atmospheres. In the cases of the coated samples, m- ZrO2, c- ZrO2, YAG, and crystalline phases (Ba(AlSiO4)2–hexacelsian, celsian) were identified. Scratch tests performed on both coating compositions revealed strong adhesion after pyrolysis as well as after oxidation tests in both atmospheres. After testing in the water vapor atmosphere, Cr ions diffused through the bond coat, but no delamination of the coatings was observed. 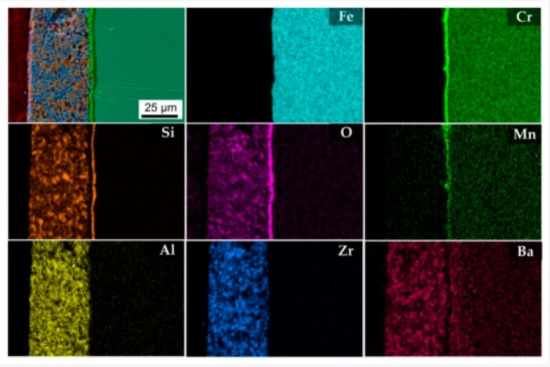 Abstract: The corroded surfaces of historical glass samples were studied by micro-Raman spectroscopy. The spectra acquired from lateral and stratified mapping were analyzed by principal component analysis providing the number of linearly independent spectral components and by multivariate curve analysis resulting in spectrum of native glass and spectra of different corrosion products (loadings) and their relative abundances (scores) in each measured spot. The obtained results were qualified by comparison of results obtained by stratified mapping with the results of lateral mapping. On the basis of dominant scores, the lateral distribution of various corrosion products was identified. The quality of corrosion products was only roughly identified by the spectral database (S.T. Japan spectral database). 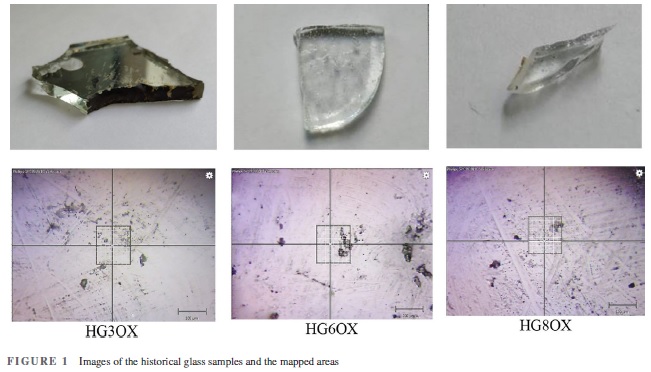 Abstract: Lithium hydroxide, LiOH, in the amounts ranging from 0.1 to 1.2 wt% has been used as a sintering aid to improve the densification of MgAl2O4. The addition of 0.3 wt% LiOH promotes densification and limits grain growth. The activation energy of sintering, calculated using master sintering curve approach, decreases from 790 ± 20 kJ.mol−1 to 510 ± 20 kJ.mol−1 with the addition of 0.3 wt% of LiOH. In addition, MgAl2O4 was also mixed with 10 wt% of LiOH to amplify the formation of reaction products. High-temperature XRD results showed that secondary phases (MgO and LiAlO2) are produced above 1040 °C. The secondary phases start to disappear at T > 1200 °C, and MgAl2O4 is produced. While adding small amounts of LiOH, up to ca. 0.3 wt%, is beneficial for densification and suppressing grain growth, there exists a critical concentration of Li+ that is accounted for by the preferential incorporation of lithium ions into MgAl2O4 crystal lattice.

Abstract: Nanosilver-loaded PMMA bone cement (BC-AgNp) is a novel cement developed as a replacement for conventional cements. Despite its favorable properties and antibacterial activity, BC-AgNp still lacks biodegradability and bioactivity. Hence, we investigated doping with bioactive glasses (BGs) to create a new bioactive BC characterized by time-varying porosity and gradual release of AgNp. The BC Cemex was used as the base material and modified simultaneously with the AgNp and BGs: melted 45S5 and 13-93B3 glasses with various particle sizes and sol–gel derived SiO2/CaO microparticles. The effect of BG addition was examined by microscopic analysis, an assessment of setting parameters, wettability, FTIR and UV-VIS spectroscopy, mechanical testing, and hemo- and cytocompatibility and antibacterial efficiency studies. The results show that it is possible to incorporate various BGs into BC-AgNp, which leads to different properties depending on the type and size of BGs. The smaller particles of melted BGs showed higher porosity and better antibacterial properties with the moderate deterioration of mechanical properties. The sol–gel derived BGs, however, displayed a tendency for agglomeration and random distribution in BC-AgNp. The BGs with greater solubility more efficiently improve the antibacterial properties of BC-AgNp. Besides, the unreacted MMA monomer release could negatively influence the cellular response. Despite that, cements doped with different BGs are suitable for medical applications.

Abstract: Dysprosium-doped borophosphate glasses, containing the divalent cations Mg2+, Ca2+, Sr2+, Ba2+, and Zn2+, are prepared by the melt-quenching technique. The structure of the glasses is investigated by Raman, infrared, and nuclear magnetic resonance (NMR) spectroscopies and the fluorescence properties are determined. The Dy3+ emission lifetime increases with an increasing ionic field strength and its maximum is observed in the Mg2+ and Zn2+ containing glasses. This result can be explained by the stronger M-O bonding which causes a rearrangement of the borophosphate network and creates a local Dy3+ environment of comparably low symmetry. This is in agreement with the Raman spectra and the evolution of the molar volume. The effect of the B/P variation on the emission properties of Dy3+ is investigated in a second series of glasses where the emission lifetime is found to be maximum at 10 mol% B2O3.

vmokranova2021-05-31T17:11:27+02:00May 31st, 2021|
Page load link
Manage Cookie Consent
To provide the best experiences, we use technologies like cookies to store and/or access device information. Consenting to these technologies will allow us to process data such as browsing behavior or unique IDs on this site. Not consenting or withdrawing consent, may adversely affect certain features and functions.
Manage options Manage services Manage vendors Read more about these purposes
View preferences
{title} {title} {title}
Go to Top