We would like to draw your attention to the new papers of our researchers presenting their research results achieved in collaboration with the colleagues from FunGlass partners´ institutions. The papers are published in peer-reviewed and highly cited journals:

Abstract: Nine compositional series of 15(Na2O, K2O)•10(CaO, ZnO)•75(ZrO2, SiO2) glass-forming melts were studied, all with the ZrO2 content of 0, 1, 3, 5 and 7 mol.%. The investigated glass compositions were obtained by equimolar substitutions ZrO2 / SiO2, ZnO / CaO and K2O / Na2O. Surface tension of studied glassforming melts was determined by the sessile and pendant drop profile numerical analysis in the temperature range (1250 – 1500) °C. The experimental values of melt density were used. The linear temperature dependence of surface tension was observed for all samples with only small differences between values obtained from sessile and pendant drop profiles. The Shakhmatkin and Vedishcheva thermodynamic model (TDM) was evaluated for each glass melt at temperature of 1400 °C. The total number of 36 components was considered in TDM. Only 26 components were present with non-negligible equilibrium amount. The surface tension was described by the multilinear function of equilibrium amounts of statistically independent non-negligible components of the TDM. The surface active components were identified by negative values of their coefficients. Such way the N3S8 and C2ZrS4 were identified as “strongly” surface active and NCS5 and KS4 as probably surface active. Regarding the oxide compositional point of view, the surface tension was mostly influenced by ZnO (increase with the addition of the oxide) and by K2O (decrease with the addition of the oxide).

Abstract: In this study, sodium exchange for caesium in a mixed alkali lime silicate glass was carried out using electric field-assisted ion exchange (EF-IE). Na/Cs exchange was realised by applying electric fields up to 2000 V cm−1 for 5 min on glass tubes immersed in molten CsNO3 at 460 °C. The chemical concentration profiles measured near the glass surface showed a bilayer concentration profile which comprises caesium and potassium-rich layers, the formation of the potassium-rich layer being associated with the different mobility of alkali ions. Nanoindentation analysis outlined that surface layer produced by Na/Cs ion-exchange is characterised by poorer mechanical properties than Na/K ion-exchanged layer. Raman spectroscopy investigation revealed that the Na/Cs ion-exchanged layer has a denser structure with respect to raw glass, this being responsible for the different mechanical properties.

Abstract: Hot-dip aluminum and Si-modified aluminum diffusion coatings were applied on the substrate of nickel-base superalloy IN-738LC to enhance its hot corrosion behavior for high-temperature applications. Aluminizing salt bath consisted of KCl, NaCl, NaF, Na3AlF6, and Al powder, while the Si-modified salt bath contained NaCl, NaF, KCl, Na2SiF6, and Na3AlF6. A temperature of 750 °C and an operating time of 30 min were applied for coating. At this condition, the thicknesses of about 48 and 35 µm were achieved for aluminum and Si-modified aluminum coatings, respectively. All coated samples were immersed in the molten salt of Na2SO4–25 wt%NaCl composition for 60 and 140 h for the hot corrosion test. It was found that the Si-modified coated samples had better corrosion resistance. The high hot corrosion resistance was believed to be due to the formation of the protective and continuous scale of Al2O3 and SiO2 and no sign of sulfidation was detected at 750 °C.

Abstract: The glasses with composition xTiO2-(100-x)[40Na2O-60SiO2] (0 ≤ x ≤ 30 mol%) were studied using Raman spectroscopy and thermodynamic modeling. According to the thermodynamic modeling results, the chemical structure of studied glasses is defined by seven chemical groups (TiO2, SiO2, Na2O⋅2SiO2, Na2O⋅SiO2, Na2O⋅3TiO2, Na2O⋅TiO2, Na2O⋅TiO2⋅SiO2), whereas the short-range order (SRO) structures are TiO5, TiO6, Q4, Q3 and Q2 species. Existence of all these SRO structures was confirmed by the analysis of measured Raman spectra. The equilibrium molar amounts of SRO groups calculated in the framework of the Shakhmatkin-Vedishcheva thermodynamic model and those derived from spectroscopic data exhibit a positive correlation.

S. Abbaszadeh, A. Pakseresht, H. Omidvar, A. Shafiei: Investigation of the High-Temperature Oxidation Behavior of the Al0.5CoCrFeNi High Entropy Alloy. In: Surfaces and Interfaces, Volume 21, 2020, 100724.

Abstract: As a new class of materials, High Entropy Alloys (HEAs), have been recently used for various usages such as high-temperature applications. High entropy alloys have such unique properties as high strength, high-temperature phase stability, good fracture resistance, and excellent softening resistance at high temperatures. Studies on the oxidation behavior of as-cast high entropy alloys are, however, currently limited. The oxidation behavior of Al0.5CrCoFeNi HEA was investigated at three different temperatures of 800, 900, and 1000°C, and in the air. The results showed that the oxidation kinetics of this alloy followed the parabolic rate law. However, at 1000°C, two-step oxidation kinetics was found: in the first step, it followed the almost linear oxidation rate law (n=0.97); in the second one, the predominant mechanism followed the parabolic rate law (n=0.56). Analysis of the morphology and phase composition of the oxide layers was done using the Scanning Electron Microscopy (SEM) and X-ray diffraction. At all temperatures, the results showed that the oxide layers consisting of Cr2O3/Al2O3 and spinel of Ni, Co, and Fe were formed in the Al depleted zone. 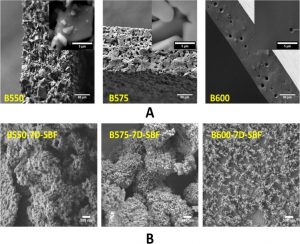 R. Dagupati, M. Liška, A. López-Grande, F. Muñoz: The structure of barium phosphate glasses and its influence on their thermodynamic stability and viscous flow. In: Materials Chemistry and Physics, Volume 258, 2021, 123941.

Abstract: The Shakhmatkin and Vedishcheva thermodynamic (SVTD) model of associated solutions has been developed in glasses of the system BaO–P2O5, with the aim of deriving their short range structure and predicting the volume properties. The applicability of the model was examined by comparing the structure obtained from thermodynamic modelling and by Nuclear Magnetic Resonance spectroscopy. The evaluation of the molar volume of the investigated glasses was carried out through comparison of the experimental values calculated by two approaches: i) with the glass molar volume obtained through a linear combination of the product of the molar fractions of system components and their respective crystalline volume; and ii) with the molar volumes calculated by a multilinear regression analysis of the experimental molar volume of each composition. Furthermore, the viscosity curves were determined at low and high temperature ranges by beam-bending and rotation methods from which the fragility and activation energy of the viscous flow have been calculated and correlated with the thermodynamic chemical structure of the glasses.

Abstract: In this work, an orthogonal array design (OAD), OA16, was utilized to study the parameters statistically for the fabrication of WC preforms. The effects of prominent parameters of gel-casting i.e., gelation agent (sodium alginate to calcium phosphate ratio), size of initial WC powder, WC powder loading and also two other parameters such as pre-sintering temperature and time on the relative density, porosity and flexural strength of the WC preforms were examined. The effects of these factors on WC preforms were investigated by the analysis of variance (ANOVA). The results of ANOVA showed that the size of initial WC powder as the most significant parameter affecting the porosity and flexural strength. Flexural strength of 33 MPa and porosity of 51% were achieved for the WC preform with 25 vol.% WC, size of initial powder of 0.9 μm, pre-sintering temperature of 1500∘C and pre-sintering time of 4 h. XRD results and SEM micrographs of the optimized WC preforms and the resulted W–ZrC composite showed a uniform porous microstructure and uniform distribution of phases (W and ZrC), respectively.

Abstract: The sol-gel method was used for preparation of sols and the precursor sols were prepared from a mixture of titanium(IV) tetra-isopropoxide, isopropanol, water, nitric acid and “small molecule” as stabilizing reagent. The acetylacetone and acetic acid were used as small molecules (“stabilizers”). Three TiO2 xerogels were studied by DTA–TG analysis in combination with the XRD analysis. The crystallization was determined by non-isothermal analysis. The values of activation energy of crystallization were calculated using Johnson-Mehl-Avrami model. For xerogel without “small molecules” and xerogel with acetic acid, the activation energy of anatase crystallization is E = (1.07 ± 0.02)·105 J.mol-1 and E = (0.78 ± 0.02)·105 J.mol-1, respectively. According to Avrami coefficient M ∼ 1 for both xerogels, the mechanism of crystallization is surface nucleation. There is no crystallization of anatase in xerogel with acetylacetone.