Lectures and trainings on electrochemical measurements with dr. Viscor

We are pleased to inform that Prof. Petr Viscor, the recognized expert in the area of Electrical Impedance Spectroscopy (EIS), visited FunGlass from February 10th to February 21th, 2020. He delivered a couple of lectures on the basics of EIS as well as consultations related to the topic. 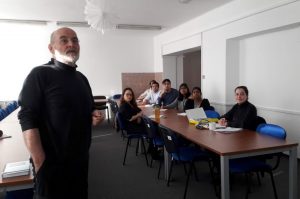 First, some necessary elements of the theory behind EIS experimental method was presented, explained and discussed.

Second, some practical aspects of the EIS experiment were discussed, with focus on various EIS raw data representations and EIS data error analysis. 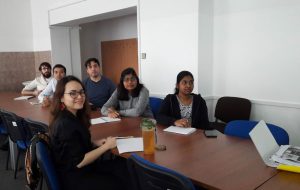 Third, the analysis of the EIS experimental data was discussed in terms of simple, linear R,C,L equivalent electrical networks modelling. Here, the focus was on a clear connection between the topology and various R,C,L values of the model networks and  the corresponding physical processes taking place in the material under investigation.

Fourth, some elements of Electrochemical Impedance Spectroscopy were presented and discussed.

The two lectures were supplemented by practical work in the EIS laboratory on some specific experiments, directly related to Electrochemical Impedance measurements.

vmokranova2020-11-14T13:19:53+01:00February 24th, 2020|
Page load link
Manage Cookie Consent
To provide the best experiences, we use technologies like cookies to store and/or access device information. Consenting to these technologies will allow us to process data such as browsing behavior or unique IDs on this site. Not consenting or withdrawing consent, may adversely affect certain features and functions.
Manage options Manage services Manage vendors Read more about these purposes
View preferences
{title} {title} {title}
Go to Top