New Researcher from Spain at FunGlass

José Joaquín Velázquez García received his PhD in Applied Physics at Universidad de La Laguna (ULL). The topic of his PhD thesis was 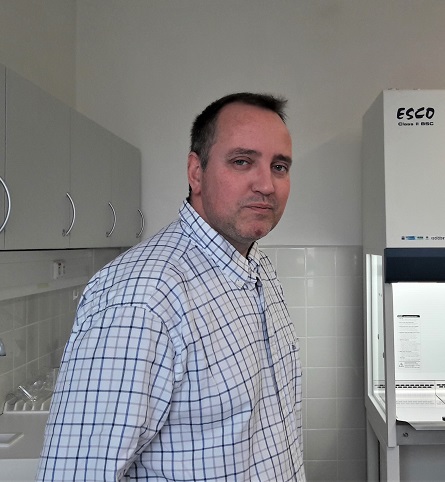 Lanthanides ions doped glass-ceramics based on insulating and/or semiconductors nanocrystals dispersed in SiO2. Synthesis and structural-spectroscopic characterization. From 2014 to 2015 ha was a post-doctoral researcher at the Inorganic Chemistry Department of the same University in the framework of a Spanish Research Project in which improve the efficiency in the Hydrogen generation by means of novel nanostructured catalyst using the ‘water-splitting’ process.  During his work, he used mass spectrometer technique and improved his skills on synthesis processes like freeze-drying method. This work resulted in two scientific papers. From June 2015, he joined GlaSS group at Instituto de Cerámica y Vidrio (ICV), CSIC, as a post-doctoral researcher; working in the same topic of his PhD thesis that permits him optimized the materials synthesis to obtain glass and glass-ceramics with high content of optically active phase in the form of thin films and bulks/self-supporter layers and fibers. During this work, he improved his skills on microscopy (HRTEM, SREM-EDX), XRD analysis, X-Ray Absorption Spectroscopy, ellipsometry, among others characterization technics. The very successful work resulted in seven scientific papers.

Dr. Jose Joaquin Velazquez joined to FunGlass since January 2018 to conduct fundamental and applied research on different types of transparent oxyfluoride glasses and glass-ceramics in the way of thin films on glass substrates, self-supporter layers and aerogels. These materials will be prepared by sol-gel methods and optimize for its use in photonic applications. Several techniques such as XRD, RAMAN, SEM, HRTEM, UV-VIS-NR luminescence, FTIR, FIR and ellipsometry measument, will be use for the characterization and optimization of glass-ceramics materials.

vmokranova2018-04-23T09:27:00+02:00January 25th, 2018|
Page load link
Manage Cookie Consent
To provide the best experiences, we use technologies like cookies to store and/or access device information. Consenting to these technologies will allow us to process data such as browsing behavior or unique IDs on this site. Not consenting or withdrawing consent, may adversely affect certain features and functions.
Manage options Manage services Manage vendors Read more about these purposes
View preferences
{title} {title} {title}
Go to Top