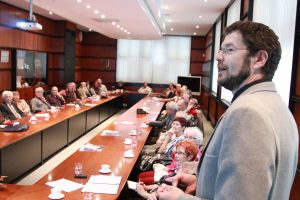 Professor Dušan Galusek received an invitation from the Alumni Club of the Slovak Technical University in Bratislava to take part in a popular science talk series “Interviews with Scientists” held on October 3, 2017 at FCHPT STU in Bratislava.

Professor Galusek, a graduate of the FCHPT STU, gave Alumni an interesting lecture on his research agenda titled “What is Ceramics? The Unknown World of Materials”. He used this opportunity to promote the FunGlass Center among participating guests from other universities and the Slovak Academy of Sciences.

vmokranova2020-11-14T19:41:43+01:00October 13th, 2017|
Page load link
Manage Cookie Consent
To provide the best experiences, we use technologies like cookies to store and/or access device information. Consenting to these technologies will allow us to process data such as browsing behavior or unique IDs on this site. Not consenting or withdrawing consent, may adversely affect certain features and functions.
Manage options Manage services Manage vendors Read more about these purposes
View preferences
{title} {title} {title}
Go to Top