FunGlass papers published at the end of 2021

FunGlass papers published at the end of 2021

FunGlass papers from the end of 2021

Abstract: The structure of xTiO2-(100-x)[40Na2O-60SiO2] (x = 10, 15, 25 and 30 mol%) glasses and melts was studied in situ in the temperature range of 20–1150 °C using high-temperature Raman spectroscopy. The fraction of five-fold coordinated Ti4+ ions gradually decreases as temperature increases above ∼ 600 °C in the samples with x ≤ 25 mol%. No similar changes were found for the sample with x = 30 mol%. The change in titanium coordination is related to the transformation of square-based TiO5 pyramids into TiO4 tetrahedra with the formation of additional non-bridging oxygen atoms (NBO) in the melt structure. This transformation can be described by [TiØ4O]2− + SiØ3O− ↔ TiØ3O− + SiØ2O22− and [TiØ4O]2− + SiØ4 ↔ TiØ3O− + SiØ3O− (Ø is bridging oxygen atom) disproportional reactions, which are shifted toward the right with increasing temperature. All studied melts exhibit a more uniform titanium distribution in comparison with glasses of corresponding composition.

Abstract: Glass-ceramic matrix composites for bone-tissue regeneration were produced in the form of highly porous foams utilizing the ‘polymer-derived ceramics’ (PDCs) approach. More precisely, two different commercial silicone polymers (a poly-methyl-siloxane, MK, and a polymethyl-phenyl-silsesquioxane, H44), reacting with suitable Na2O, CaO, and P2O5 yielding fillers were considered. The reaction was designed to yield products resembling Biosilicate® glass-ceramic i.e. Na2CaSi2O6 embedded in a silico-phosphate glass matrix. Subsequently, the samples were heat treated either in the air or in the N2 atmosphere, implying improvements in the mechanical properties and providing extra functionality. The pyrolysis in an inert atmosphere led to composites comprising a carbon phase, which promoted the absorption of infrared radiation. Such functionality makes the obtained composites promising in the perspective of disinfection of bone-tissue implants and photothermal therapy. 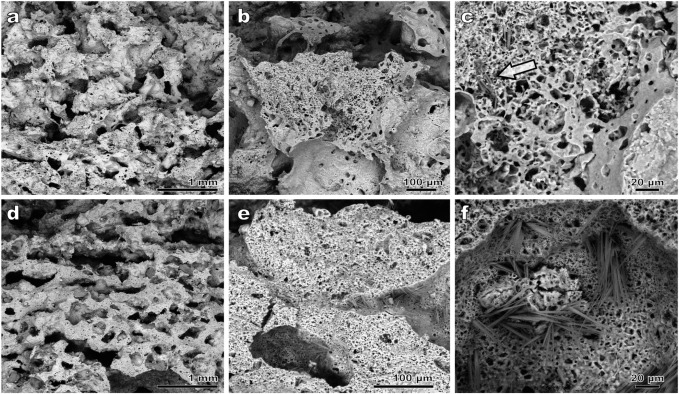 Abstract: Mesoporous bioactive glass nanoparticles (MBGNPs) are attracting significant attention as suitable materials for multifunctional biomedical applications. In this study, cerium was incorporated into MBGNPs using two different approaches. In the first approach, cerium was added to the glass system directly during the synthesis, while in the second approach, cerium was added to the as-synthesized MBGNPs via the template ion-exchange method. The influence of the method of synthesis on the physicochemical properties of nanoparticles was examined by SEM, TEM, XRD, FTIR, and N2 adsorption-desorption analyses. The MBGNPs exhibited spheroidal morphology and disordered mesoporous structure. XRD analysis confirmed the amorphous nature of the nanoparticles. The chemical composition was determined by the acid digestion method using ICP-OES. The influence of the synthesis method on the specific surface area, mesoporosity, and solubility of synthesized nanoparticles in Tris/HCl (pH 7.4) and acetate (pH 4.5) buffer has also been studied. The obtained Ce containing MBGNPs were non-cytotoxic toward ​preosteoblast MC3T3-E1 cells in contact with nanoparticles in a concentration of up to 100 ​μg/mL. The anti-inflammatory effect of Ce containing MBGNPs was tested with lipopolysaccharides (LPS)-induced proinflammatory RAW 264.7 macrophage cells. Ce containing MBGNPs decreased the release of nitric oxide, indicating the anti-inflammatory response of macrophage cells. Ce containing MBGNPs also showed antibacterial activity against S. aureus and E. coli. The mentioned features of the obtained MBGNPs make them useful in a variety of biomedical applications, considering their biocompatibility, anti-inflammatory response, and enhanced antibacterial effect.

Abstract: Electrochromism is the ability of a material to selectively change its coloration under the influence of an external electric current/potential and maintain it even after the power source has been disconnected. Devices that use such a mechanism are known as electrochromic devices (ECDs). Over the years, significant effort has been invested into the development of flexible ECDs. Such electrochromic tapes or fibers can be used as smart textiles. Recently, we utilized a novel geometrical approach in assembling electrochromic tapes which does not require the use of optically transparent electrodes. The so-called inverted sandwich ECD configuration can employ various color-changing mechanisms, e.g., intercalation, redox reactions of electrolytes or reactions on electrode surfaces. One of the most frequently used electrochromic metal oxides is WO3. However, other metal oxides with different coloration responses also exist. In this paper, we explore the use of V2O5 and TiO2 in metal-tape-based ECDs in the inverted sandwich configuration and compare their performance with WO3-based devices. Morphological features of metal oxide thin layers were investigated with scanning electron microscopy (SEM), and the performance of the tapes was investigated electrochemically and spectroscopically. We demonstrate that well-established preparation techniques (e.g., sol–gel synthesis) along with coating approaches (e.g., dipping) are adequate to prepare optically nontransparent fiber electrodes. Depending on the metal oxide, flexible electrochromic fiber devices exhibiting different coloration patterns can be assembled. Devices with TiO2 showed little coloration response, while much better performance was achieved in the case of V2O5 and WO3 ECDs.

Abstract: Transparent oxyfluoride glass-ceramics (GCs) with embedded β-Na1.5Y1.5F6 crystals doped with Er3+ ions were fabricated by a melt-quenching method with subsequent heat-treatment. The structural characterizations and spectroscopic techniques were performed to verify the precipitation of β-Na1.5Y1.5F6 crystals and partition of the Er3+ dopant into the crystals. Bright green up-conversion (UC) emission was achieved in Er3+-doped glass-ceramic (Er-GC). Furthermore, the temperature-dependent visible UC behavior based on thermally coupled energy levels (TCLs) and non-thermally coupled energy levels (NTCLs) was also examined in the temperature range 298 k to 823 K with maximum relative sensitivity (Sr) of 1.1% K−1 at 298 K for TCLs in Er-G and Er-GC samples.

Abstract: The study focuses on an assemblage of glass finds from the citadel of Kafir Kala, Uzbekistan, located along one of the major Eurasian branches of the “Silk Roads” with a consistent occupation between the 8th and 12th century CE. Glass fragments for this study were selected based on marked surface alterations they showed, with stratified deposits of different thickness and colours. Starting from a preliminary observation under Optical Microscope, fragments were clustered into four main groups based on the surface appearance of the alterations; Scanning Electron Microscopy investigations of the stratigraphy of the alteration products were then carried out, to evaluate micro-textural, morphological and compositional features. Data from the analyses allowed identifying preferential patterns of development of the various degradation morphologies, linkable to compositional alterations of the glass due to burial environment and the alkali leaching action of the water. Iridescence, opaque weathering (at times associated with black stains), and blackening were identified as recurring degradation morphologies; as all but one sample were made of plant ash-based glass, results show no specific correlation between glass composition and the occurrence of one or the other degradation pattern, often found together. Framed in a broad scenario, the paper aims to set the basis for the development of a study approach dedicated to the degradation morphologies affecting archaeological glasses, a topic still lacking systematisation and in-depth dedicated literature.

Abstract: Surface bio-functionalization through covalent attachment of bioactive molecules is a promising approach to facilitate rapid bone-implant integration. Radical-rich plasma polymer interlayers are highly attractive as platforms that enable covalent biofunctionalization in a single-step, reagent-free manner. However, fabrication of mechanically robust plasma polymer films, particularly for biomedical devices that operate in corrosive body fluids, is not trivial. Here we show a facile approach to tune the robustness of ion-assisted plasma polymer (IPP) films via simply varying the nitrogen atomic concentration incorporated into their structure. X-ray photoelectron spectroscopy data indicated that the total sp3/sp2 ratio of carbon atoms decreases in the films with increasing nitrogen atomic concentration. Electron recoil detection analysis data provided evidence that the hydrogen content decreases as the nitrogen atomic concentration increases. Nano-indentation and nano-scratch tests, together with long-term stability studies in simulated body fluid, showed a strong correlation between the nitrogen atomic concentration and the robustness and stability of the films. We confirmed the potential of the optimized, nitrogen-rich IPP film to regulate osseointegration by covalent attachment of fibronectin followed by quantifying primary osteoblast attachment and proliferation. The IPP films developed here hold great potential as robust interfaces for biomimetic surface engineering of implantable biomedical devices, in particular bone implants.

Abstract: A novel organic-inorganic hybrid conductometric NO2 sensor has been introduced by depositing liquid-crystalline zinc oktakisalkylthiophthalocyanine [(C6S)8PcZn] on the surface of Cu2O nanowires. Cu2O nanowires were synthesized by electrochemical anodization of Cu films on glass substrates. Surface structures of bare Cu2O and (C6S)8PcZn@Cu2O nanowires hybrid structures were monitored by scanning electron microscope (SEM). UV–vis spectrophotometer measurements revealed the heterostructure formation by comparing the absorption profiles of bare Cu2O nanowires, (C6S)8PcZn thin film, and (C6S)8PcZn@Cu2O hybrid nanowires. The interdigitated transducers (IDT) were used for conductometric gas measurements. The sensing properties of all samples were investigated towards 500 ppb, 1 ppm, 2 ppm, and 5 ppm NO2 under dry airflow in 30 °C, 50 °C, 100 °C, and 150 °C. The measurements at 150 °C were repeated for (C6S)8PcZn film and hybrid sample using the same concentrations of NO2 gas under 38 % relative humidity airflow. In addition, selectivity of hybrid sensor was confirmed with carbon monoxide (CO), hydrogen (H2) and ethanol (C2H5OH) measurements. Our density functional theory calculations indicate that S atoms play a crucial role in improving the sensor response. The sensing properties and sensing mechanisms of samples were compared and discussed.

Abstract: Polysilazane-based double layer composite coatings consisting of a polymer-derived ceramic (PDC) bond-coat and a PDC top-coat that contains ceramic passive and glass fillers were developed. To investigate the environmental protection ability of the prepared coatings, quasi-dynamic corrosion tests under hydrothermal conditions were conducted at 200 °C for 48–192 h. The tested PDC coatings exhibited significant mass loss of up to 2.25 mg/cm2 after 192 h of corrosion tests, which was attributed to the leaching of elements from the PDC coatings to the corrosion medium. Analysis of corrosion solutions by inductively coupled plasma optical emission spectrometry (ICP-OES) confirmed the presence of Ba, Al, Si, Y, Zr, and Cr, the main component of the steel substrate, in the corrosion medium. Scanning electron microscopy (SEM) of the corroded surfaces revealed randomly distributed globular crystallites approximately 3.5 µm in diameter. Energy-dispersive X-ray spectroscopy (EDXS) of the precipitates showed the presence of Ba, Al, Si, and O. The predominant phases detected after corrosion tests by X-ray powder diffraction analysis (XRD) were monoclinic and cubic ZrO2, originating from the used passive fillers. In addition, the crystalline phase of BaAl2Si2O8 was also identified, which is in accordance with the results of EDXS analysis of the precipitates formed on the coating surface.