Prof. Galusek and dr. Kraxner participated at the 2017 ICG Annual Meeting & 32nd SISECAM Glass Symposium held on October 22-25, 2017 in Istanbul, Turkey. Prof. Galusek delivered an invited lecture on crystallization of aluminate glasses and their utilization in preparation of composites with eutectic microstructures, and highly efficient phosphors for energy efficient light sources. Dr. Kraxner presented his results on recycling automotive glass by transforming them into hollow microspheres, which can be utilized as fillers to polymers for plastic parts used in automotive industry.

Numerous meetings also took place in the frame of the conference. A possibility for submission of two joint H2020 project proposal was discussed with prof. Lothar Wondraczek from Otto-Schott-Institute in Jena, and training plans for new trainees coming to the Funglass centre were discussed with prof. Alicia Durán, CSIC, Spain. Plans for extension of collaboration were prepared with prof. Sener Oktik, head researcher of the Sisecam glass company, Turkey, who is also a member of the International Advisory Board of the Centre, and prof. Fabiano Nicoletti, member of the Industrial Board of the Centre, and scientific advisor of the Stevanato Group, major glass producer from Italy. Plans on organisation of a Funglass symposium on Functional Glass in the frame of the Annual conference of the German Glass Society, which will be held in May 2018 in Bayreuth, Germany have been detailed during the discussions with prof. Reinhard Conradt, president of the German Glass Society, and dr. Ulrich Roger, its secretary general. 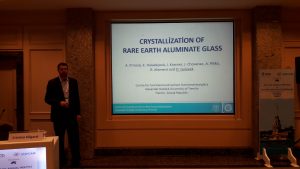